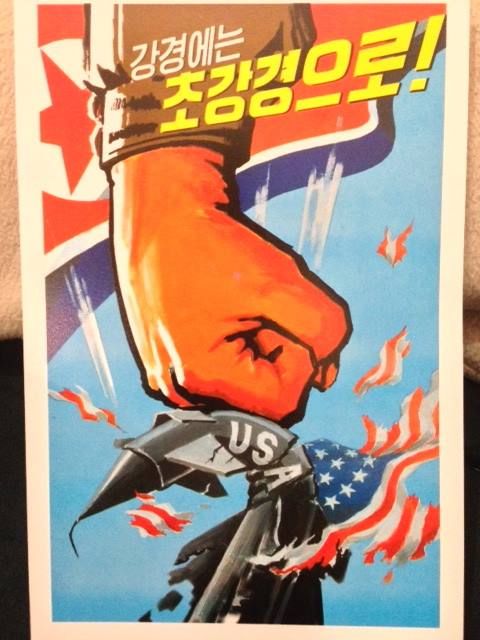 The corporate media reduces the DPRK (North Korea) to the Kim family and prefaces their names with the terms “madman”, “evil” and “brutal”. Such vilifications of foreign leaders are used here not only to signify they are target for US overthrow. They are meant to intimidate and isolate anti-war activists as being out in left field for ever wanting to oppose a war against countries ruled by “madmen” – be they Saddam, Fidel, Hugo Chavez, Ahmadinejad, Qaddaffi.

Yet to a sensible person, it is crazy that the US, with nuclear weapons thousands of miles from home, in South Korea, denies North Korea has a right to have its own nuclear weapons on its own land – particularly when the North says it is developing nuclear weapons only as a deterrent because the US won’t take its own weapons out of the Korean peninsula.

Missing in what passes for discourse on the DPRK in the corporate media is that the US was conducting month-long war maneuvers last March in Korea, now extended into April, using stealth bombers, undetectable by radar, capable of carrying nuclear weapons. And this year these are not “deterrent” war maneuvers, but “pre-emptive war” maneuvers.

Would the US government and people get a little “irrational” if a foreign country that previously had killed millions of our people, sent nuclear capable stealth bombers off the coasts of New York City, Washington DC, Houston, Miami, Los Angeles, San Francisco, there to fly around for a month in preparation for a possible nuclear attack on us? For what is called, in warped US language, war “games”?

The US may have killed 20% of the population of Korea, said General Curtis Lemay, who was involved in the US air war on Korea. If so, that is a higher rate of genocidal slaughter than what the Nazis inflicted on Poland or the Soviet Union. The Korean War may be unknown ancient history to us, but it is no more ancient history to Koreans than the Nakba is to Palestinians.

North Korea knows that history, and it is warning the US they know what to expect and are arming themselves to prevent it. Are the DPRK leaders “paranoid” or taking justifiable precautions?

What kind of deranged people call war preparations a “war game”? North Korea doesn’t think it’s a “game.” Over 4 million died in the last war to reunify their country that the US divided. If men had an annual rite called “group rape games” wouldn’t we think it a criminal misogynist pathology, and wouldn’t women be justified in being outraged and arming themselves in self-defense?

An accurate reading of the events leading up to the present situation shows that North Korea is responding to US military escalation, and in particular to US refusal to negotiate. This includes a peace treaty to end the Korean War, any steps towards reunifying Korea, the end to the US occupation of South Korea and ending the annual month-long US-South Korean war maneuvers. Even today, it includes US refusal to talk in order to lower the tensions.

North Korea was hit with US/UN Security Council sanctions for a missile launch last year. South Korea sent off a missile this year; were there any sanctions?

Since World War II there have been 9000 missile launches. 4 were by the DPRK. There have been 2000 atomic bomb tests. 3 were by DPRK. No country was sanctioned by the UN Security Council for this. No country except the DPRK. Why wouldn’t the North Koreans be incensed by this double standard, especially when the US has nuclear weapons in South Korea?

Korea is divided because our country invaded and divided it after the Japanese surrender. The leaders of the DPRK had been fighting the Japanese since the early 1930s, and 200,000 had lost their lives. When Korean liberation was at hand in 1945, the US intervened and blocked it.

The US was supposed to leave in 1948, along with the Soviet Union, but because Kim Il Sung was likely to win planned nation-wide elections, the US made the division permanent and blocked national elections, just as it did later in Vietnam. This lead to the Korean War, the cause of the present militarization: A foreign country divided and occupied their country against their will.

We should play our part to improve the human rights situation in Korea, not only in the North but in the South as well. Both societies are more closed and controlled than our own. Whether being occupied by foreign troops, threatened with war and war maneuvers, or subjected to harsh economic sanctions, this does not facilitate free and open societies.

If we really want more rights for the people of the DPRK then we should stop pointing a gun at their head. If we listened to Kim Jong Un’s message delivered a month ago, ignored by President Obama, “We don’t want war. Let’s talk,” that would only foster a more open society there – and in South Korea, just as we know it would  here in the US.

Stansfield Smith is an anti-war and Latin America solidarity activist in Chicago who recently returned from a trip to North Korea [Democratic Peoples Republic of Korea (DPRK)], with Koryo Tours. He can be reached at: stansfieldsmith@yahoo.com